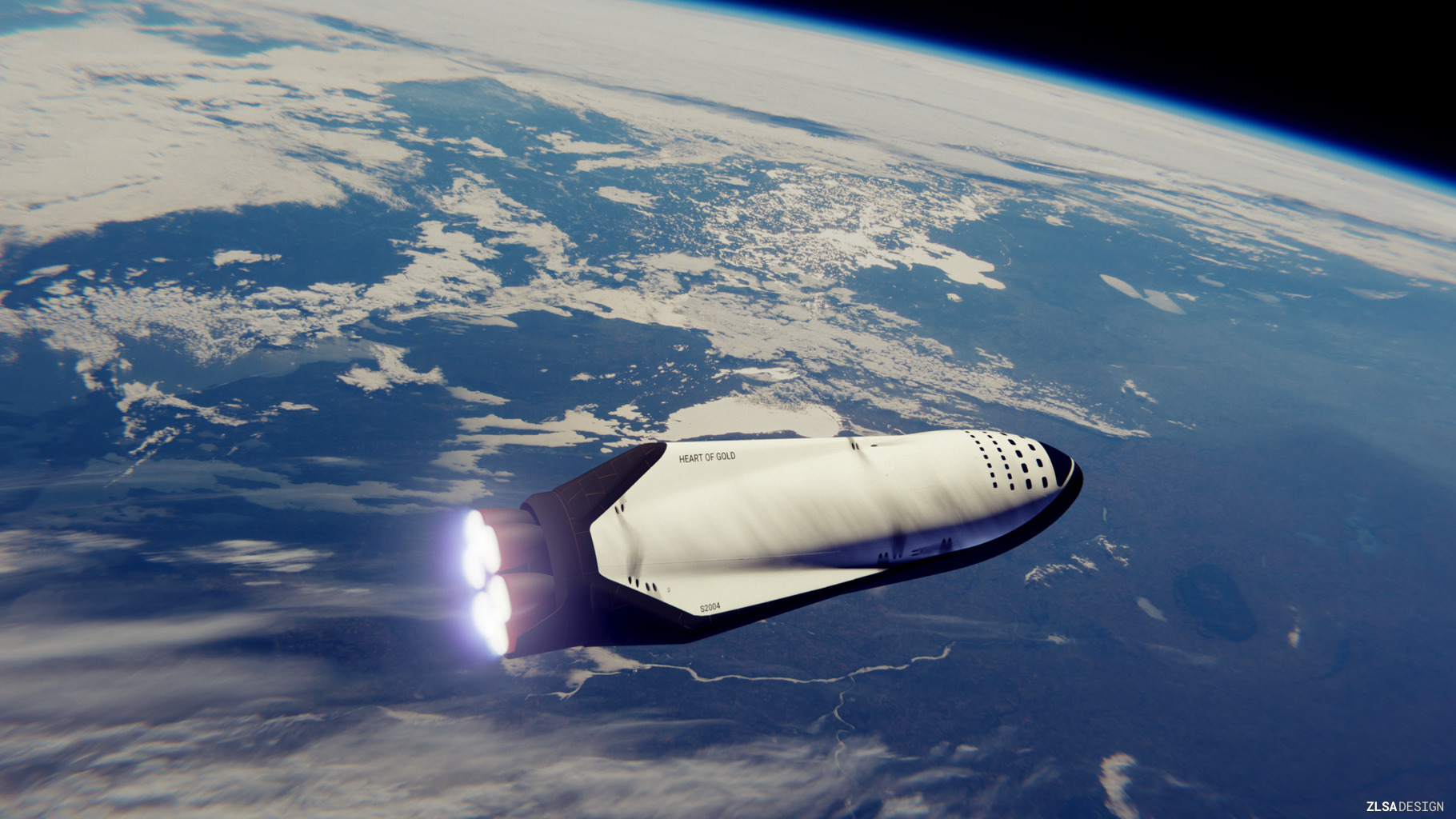 This piece shows the SpaceX Interplanetary Transportation System Mars lander performing the trans-Mars injection burn that marks the beginning of its coast to Mars.

Note: As this is depicting a future mission, the information here is speculative and is in no way intended to be accurate. It simply provides the story behind the image.

This is showing the third flight of the Heart of Gold, or S2004: Mars spacecraft, serial number 4. (Serials 1 through 3 were engineering articles, and of those, only S2003 flew into orbit.) The Heart of Gold has been refueled five times by T2002, the second tanker ever built (the first one, being the first ever upper stage for the ITS, was used as an engineering testbed) over a span of one and a half weeks. The Heart of Gold, loaded with over 220 metric tons of cargo, will land at Arcadia Planitia at an elevation of 2 kilometers below Mars’ “mean sea level.”

Immediately after the TMI burn is complete, the spacecraft will reorient itself to point away from the sun; then, it will use its 37 RCS thrusters to perform minor course corrections before shutting down most of its systems to reduce energy consumption. It stores the cryogenic propellants necessary to land on Mars in two insulated holding tanks.

The Heart of Gold’s 220 metric tons of cargo contains an ISRU plant, about 1.5 metric tons of science experiments, and over 140 metric tons of lightweight, flexible solar panels. These will be unrolled by car-sized crawler robots and connected to the Heart of Gold, allowing it to begin producing liquid oxygen and liquid methane in preparation for the first crewed ship, due to arrive in about two years.

S2004, aka Heart of Gold, is the fourth Mars spacecraft built by SpaceX. S2001 was a structural test article, and S2002 and S2003 tested the life support, power, and propulsion systems. S2002 was a ground-based testbed, and it only flew three flights, with a maximum altitude of 33km. S2003 was the first spacecraft to fly into low-Earth orbit, and it did so three times before being retired.

S2004 made its first uncrewed flight to LEO in early 2028, circling the earth for three days and testing every major system before returning to Earth. Three weeks later, it performed its first crewed launch to LEO, this time remaining in orbit for two weeks. During this time, the crew of the newly christened Heart of Gold performed multiple EVAs with both SpaceX’s zero-G EVA suit as well as the Mars surface suit. At the end of its mission, the Heart of Gold returned to Earth; over the next two months, every part of it was carefully inspected to make sure it was ready for the trip to Mars.

On December 24, 2028, the Mars-bound Heart of Gold was launched into a parking orbit. Over the next one and a half weeks, the same propellant tanker flies into orbit five times and transfers its propellant to the Heart of Gold, preparing it for the energy-intensive TMI burn. On January 2, 2029, with full propellant tanks and every system performing nominally, the Heart of Gold starts up its six vacuum Raptor engines to begin the TMI burn that sends it on its 4-month trip to Mars.

Two years later arriving on S2005, the first human sets foot on Mars in humanity’s next giant leap into the unknown.

The location shown is Winnipeg, Canada.